This was the first year I was connected with the College Radio Foundation’s Vinylthon event, and it was a remote connection at that. Since I’m new to the organization, I wasn’t very involved with promoting this year’s event. But that doesn’t mean I wasn’t excited about it.

Since Vinylthon coincides with Record Store Day – one of my favorite days of the year – I was already planning to partake of my share of vinyl on April 13th, though my planned involvement was more as a consumer. As an avid music fan of multiple genres, I’ve visited local record shops on Record Store Day for several years, purchasing vinyl recordings of my favorite artists and those I’m curious to learn more about. This year, I brought along some vinyl for the road, tuning in to regional college radio stations participating in Vinylthon 2019 between stops at some of my favorite record stores.

Truth be told, I’m a bit disappointed most of the great college radio stations in greater Cleveland didn’t participate in Vinylthon, but across Northeast Ohio, four college stations in total took part.

I got my listening started long before heading out to peruse the aisles of vinyl, tuning into 88.3 WBWC The Sting at Baldwin-Wallace University in nearby Berea from 12-2 AM. After an hour of metal featuring cult band Manowar and the Iron Maiden classic “Alexander the Great,” Cleveland’s Modern Rock Alternative switched to just that. Fresh tracks from Jeff Tweedy, St. Vincent, and the Knocks featuring Foster the People made for a nice change of pace after the midnight hour headbanging session and highlighted what college radio does best – whether played on vinyl or otherwise – music variety.

Just before hitting the sack at all too late an hour, I pulled up 91.1 WRMU at the University of Mount Union in Alliance via TuneIn (Mount Union is an hour or so to the south, making R91 impossible to receive in the Cleveland area). With a double shot of AC/DC played from a vinyl copy of their legendary Back in Black album followed by the soothing sounds of James Taylor’s “Mexico,” more music diversity was had in short order before I finally turned in for the night.

After a fitful night’s sleep (likely due to my excitement over the coming onslaught of new music), I got the day started with more variety from R91, featuring everything from Tom Jones and Lawrence Welk to Sir Elton and REO Speedwagon – all played from vinyl! Off on my way a short while later, it was a double shot of Prince, followed by the Captain & Tennille’s “Muskrat Love.” Fortunately, I’d just about made my way to my favorite record store in the universe – A Separate Reality in Cleveland’s Ohio City neighborhood – so it was a good time to tune out (sorry not sorry, “Muskrat Love” fans).

The next hour or so was spent feeling completely overwhelmed at this wonderful record store that has something for all musical tastes but specializes in progressive rock, psychedelic rock, and jazz – some of my favorite genres (as I write I’m listening to some of my Record Store Day purchases from this fantastic shop). After making several other selections from across the musical spectrum (though leaning heavily toward prog rock and jazz, including Brand X, Bruford, and John McLaughlin to name a few), I ventured on to a thrift store in Cleveland’s westside suburbs – The Current Year – that happened to be celebrating Record Store Day. With selections ranging from a free early ‘60s jazz record offered through a Facebook post to jazz violinist Jean-Luc Ponty to guitar slinging singer songwriter Dan Fogelberg, my mission in visiting this new-to-me locale was accomplished.

As I looped back toward home, I tuned back in to WRMU on my way to a record fair where a favorite record store of my youth – Underdog Records, from my hometown area 75 miles away – had set up shop. As R91 spun a plethora of classic rock, I thought how appropriate that was, since this was largely the music I shopped for at Underdog back in the day. Led Zeppelin, Aerosmith, Grateful Dead, Todd Rundgren – all played from vinyl, just like in the heyday of Underdog Records and the Album Oriented Rock (AOR) radio format of the ‘70s and ‘80s.

Returning home with more purchases (and exceeding my spending limit for the day), I switched to 88.9 WRDL out of Ashland University, about 65 miles southwest of Cleveland. Tuning in just before 3:30, I was greeted with the Yes classic “Roundabout” (a nice welcome for this prog rock fan), followed immediately by a Vinylthon promo. “How cool is that?,” I thought. I was then treated to another more music diversity, featuring everything from the Doobie Brothers to the Chairman of the Board himself, Frank Sinatra.

Closing out my Vinylthon festivities, I tuned into 91.5 WOBC at Oberlin College, 35 miles southwest of Cleveland, for their Saturday evening program Snapshots in Time, featuring classic jazz from the likes of Woody Shaw, Count Basie, and Cannonball Adderley – programming you’d expect from a school known for its music conservatory. 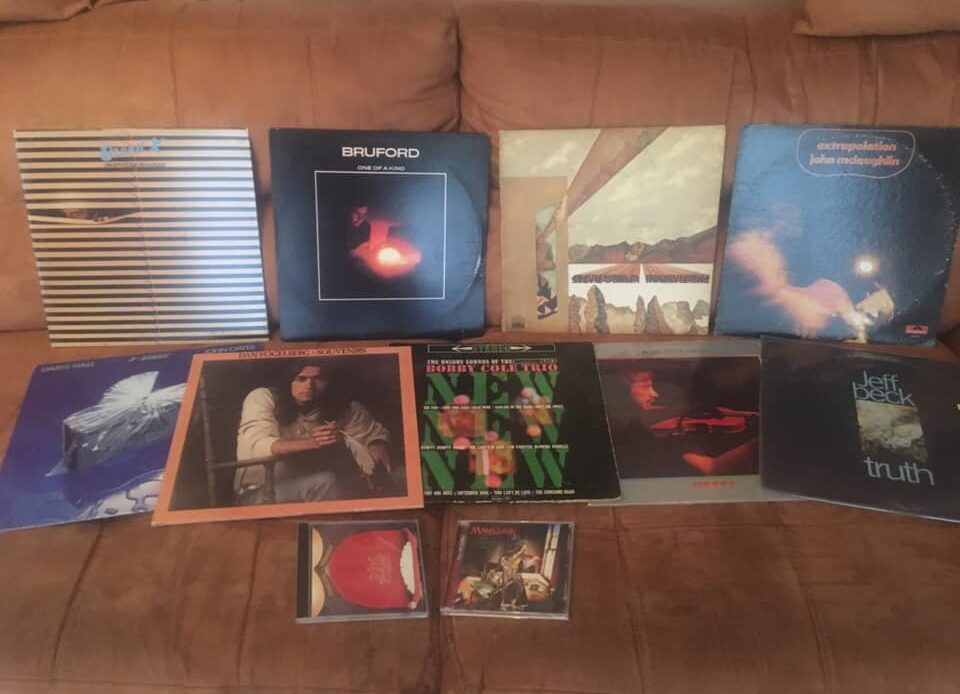 But wait, there’s more! For the icing on my Vinylthon 2019 cake, as I was getting ready to pursue my Saturday evening plans, I got a call from A Separate Reality informing me I’d won a raffle for the classic early Pink Floyd double album A Nice Pair… Sweet! It was a nice way to top off a day celebrating vinyl, college radio, and those things I love that college radio and record stores both do so well – music diversity and music discovery – precisely what Vinylthon, Record Stores, and College Radio are all about!