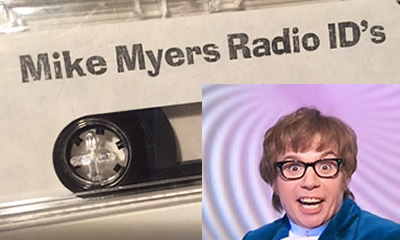 Out of the blue we have come into possession of a cassette tape dating to 1997.  It says “Mike Myers Radio ID’s” and was sent to, presumably, a few selected college radio stations back in 1997. Austin Powers: International Man of Mystery was the first installment of the movie series which came out in that year, and we believe that this tape was sent to college radio stations to promote the movie. It’s interesting that Mike took the time to make the tape in the first place and that the college radio community was viewed as being a worthy demographic to market the movie to. We know no more than that about the tape.

The only problem we have right now is getting a decent digital rip from the cassette. As soon as we do – we will unveil the contents of the tape to the world! Stay tuned…..oh behave!