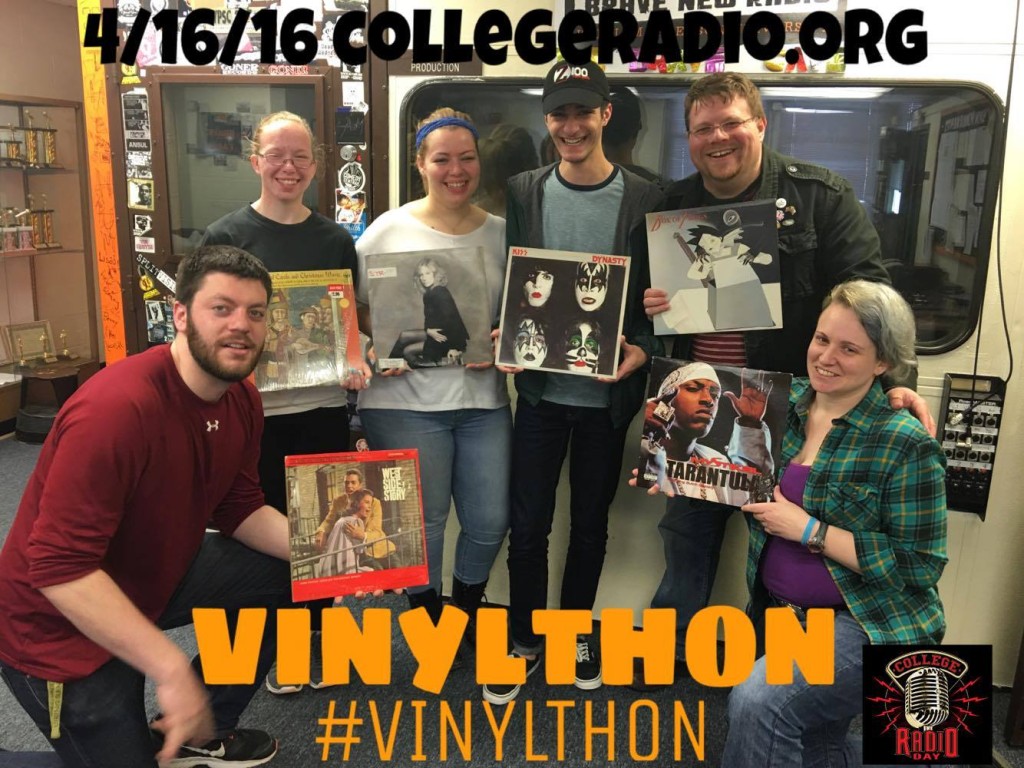 Forty campus stations across the country will come together for the first ever college radio Vinylthon on Saturday, April 16, also Record Store Day.

This inaugural Vinylthon, being organized by the people behind the national College Radio Day event every Fall, will see college radio stations broadcasting special programs entirely with music played from vinyl records only. Some stations have also pledged to broadcast a full 24 hours of nothing but vinyl music.

Founder of College Radio Day, Dr. Rob Quicke, says “the idea of this Vinylthon in conjunction with Record Store Day makes sense because college radio is still probably the only remaining broadcast medium that regularly plays music on vinyl. A lot of college students still buy vinyl at record stores and then bring them to the studio to play them on the air.”

During the day participating stations will Tweet their vinyl playlists using the #vinylthon and #vinylthon2016 social media tags and will post pictures of their prized vinyl collections on Instagram and Facebook. They will also encourage listeners to call in with requests and to share their own love of the vinyl format.

“We want to remind everyone that for college radio, vinyl is still very important,” says Quicke. “Before computer algorithms and commercially-driven streaming services there was college radio. And we passionately believe that we are still the best musical curators out there!” added Quicke.

Excitement is high among participants as they get ready for Saturday’s event. “It’s a great way to celebrate the spirit of college radio stations and independent record stores, and I’m honored to be a part of it,” said Donald Wagenblast, DJ at WTSR 91.3 FM, The College of New Jersey. Rachel Frederico, Development Director at KDUR at Fort Lewis College in Colorado, added, “KDUR has been spinning vinyl for a very long time and will continue to for as long as we are on the air. We are excited to see so many other college stations do it too. Long live college radio and vinyl!”

The event is being organized by the College Radio Foundation, a non-profit charity based in New Jersey, that also organizes the annual College Radio Day event (this year on November 4). The CRD event unites hundreds of USA college radio stations every year and has been recognized and supported by such luminaries as President Obama, Moby, Coldplay, Wilco, Andrew WK, Aviici, The Lumineers, and Wyclef Jean, among others. TIME has called College Radio Day “a nationwide movement, illuminating the cultural significance of student-run radio.”